It was a new moon in the middle of summer, and the sky glittered with a million shining stars. But their light together, could not vie with the sparkle of Radha Rani’s smile as she sat near Sri Krishna in the sylvan groves of Vrindavan.

She was mesmerized by Him, the Master of the Universe and He by Her, the Queen of pure love.  He looked down, and her eyes followed His and touched His magical blue feet. She jumped from their seat, a natural stone bench and ran to quickly gather flowers and fruits in the folds of her saree.

Spreading a leaf beside Sri Krishna, she placed succulent fruit and with a shy smile sat at His Feet and began decorating them with flowers.  He heard the sound of footsteps.

Who was coming at this midnight hour? It was the husband of Radha Rani and her two cruel sisters-in-law, Jatila and Kutila.  At midnight, they had gone to their brother and said, “Today is a special day to worship our household diety, Mother Kali, at midnight. What are you doing?  Where is your wife?”

Getting up with a start, the husband muttered, “Yes, where is she?”

“Surely in the forest with that cowherd.” Their scornful words proclaimed.

The three ran to the clearing in the middle of the forest.  The blue feet of Lord Krishna remained as He exchanged His flute for an axe, the vanamala (garland of flowers) for a munda mala (garland of skulls).  The same compassionate eyes and divine smile remained, as Krishna became Kali.

The husband and his sisters stood behind bushes and watched Radha Rani, engrossed in worship of the Blue Feet, of the Mother of the Universe.  The sisters were embarrassed as the husband felt relief and pride.

This new moon worship of Kali Ma is called Phalaharini puja (phala means fruit).  There is a belief that as we worship her with variety of fruits, She takes away the fruit of our actions, so we become free.  Free to do what? Worship Her. Dance with Her in Her every form, as Krishna, as Kali, as every form in creation, which is none other than that One Being, Pure Consciousness.

To celebrate this story of Krishna-Kali, it is a custom in some houses and temples in Bengal to dress Mother Kali as Krishna.  In the Krishna Temple in Udupi, South India, Lord Krishna is dressed as Mother Divine, on every new moon. 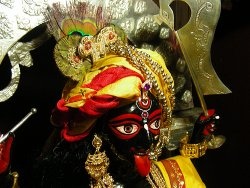 View all posts by krishnapriya108